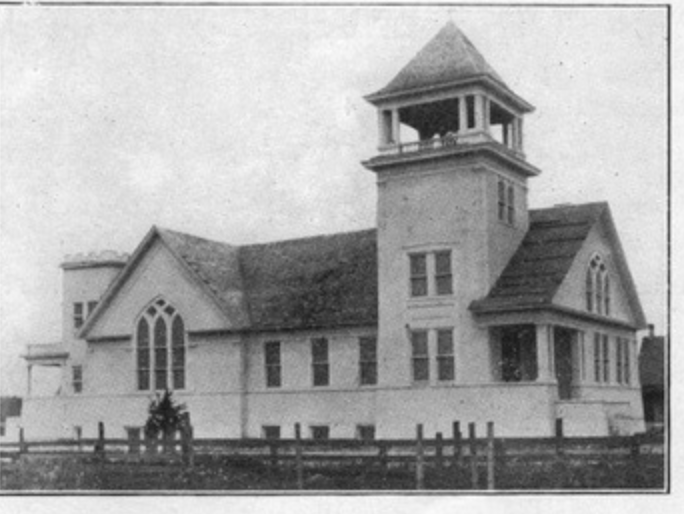 The Congregational Church came to Deer Park in 1891 along with one of the town's founders, J.N. Short. Mr. Short owned the local sawmill. He soon saw to the building of a sanctuary that was trimmed in Tamarack from Chattaroy that had been processed at his mill. The building was New England style and was imposing by its size on the Main Street of a very small town. Over the years stained and painted glass windows have been installed, usually as a memorial to a friend or member of the church. The sound of the great church bell in the East tower of the building is a traditional sound in the city of Deer Park.

In the beginning the church fronted not on Main Street but on Railroad Avenue. The name 'Open Door' derived from knowledge that the doors of the church would remain unlocked. Men who were down on their luck and rode the rails from job to job knew that they could always escape the bitter weather of Deer Park's winter through the 'open door' of the big white church.

The church building houses the worship of the oldest continuing congregation in Deer Park. It has also served as an infirmary during the great flu epidemic of 1918. For a short time it housed the Deer Park Public Library and for more than fifteen years was the center for the preparation of hot meals on wheels.

In 1998 the church obtained an Allen AP-9 organ that produces the equivalent of 40 stops and 40 ranks or sets of pipes sampled from the highest quality organ pipes. In 2003 a generous gift inspired the congregation to give toward the purchase of the Yamaha grand piano that graces the sanctuary. The Open Door is a preferred site for concerts and recitals.

2017 also saw the hiring of a new pastor, Jim Lyonais to fill our Pastoral needs as the former pastor of 20 years, Rev. Daniel Berg had retired in August of 2016.

Across three century marks and the change of a millennium the white church building has stood and still stands with its name 'The Open Door' above the lintel of its entrance.